Melaku Belay and Jeroen started to actively work together in 2013 when we did our first production called Meeting. Taking place in Addis Ababa Ethiopia in collaboration with Norwegian choreographer Magnhild Fossum and masinqo virtuoso Endris Hassen, it was a first attempt to do an interdisciplinary performance. Musicians moved and dancers participated in the music, and we setup a sound system around the audience to incorporate them more into the performance. Special foot switches were installed to trigger and layer sine tones in Ethiopian musical scales. It was big fun, well attended, we even had saxophone-king Getatchew Mekurya firing up the audience, so we decided to proceed with the idea.

In 2016 Melaku and Jeroen picked up on their previous explorations, this time in Zürich. Under the name CLASHES&CROSSFADES - metropolic moments,  they focussed on the fast accelerating infrastructural development of the City of Addis Ababa, an African Metropole which is catapulted in the 21st century with great impact on its inhabitants. Juxtaposing this issue to the impact of technological development on social life in Europe is the basis for the performance. It was test-performed two times in Zürich in 2016.

Developing the project further into a multidisciplinary performance, they searched collaboration with Swiss filmmaker Michelle Ettlin. Where Melaku combines elements of traditional dance with observations of and interventions to everyday street life, Jeroen's music shifts between the strong physicality of the saxophone and the ethereal qualities of electronic music. Both work on crossfades between the future and the past, traditional and contemporary dance, traditional acoustic instruments and new digital technologies. Michelle Ettlin, filmmaker and photographer, paints these qualities on a virtual canvas, investigating the role of new technologies in our relationship with time (simultaneousness of past, present and future) and space (virtual and physical) and questioning its use in the preservation of traditions.

In using live video and network techniques, triggered on demand by the performers and streaming it to public's smartphones, the audience's position is addressed and creates a friction between reality and virtuality. The performance  was first shown in Fendika Cultural Center in Addis Ababa on January 1st 2018. It was preceded by an intro by the Mercato metal workers recycling oil barrels, and Melaku and Jeroen improvising dance and saxophone on that.

Meanwhile performances have been taken place at the VideoEx-Festival 2018 in Zürich, and in 2019 at Zwischenraeume in Bern, at the Kunsthaus Aussersihl andt the Helmhaus in Zurich, and Monte Vuala Hotel in Walenstadtberg, all in Switzerland. Further performances are planned in summer '19 in East-Africa and in winter '19 in Europe.

Apart from performing at the Helmhaus in Zürich  the curators invited us to take part in the group exhibition "of Color", an exhibition focusing on all aspects of Color, including political and racial themes. Our contribution to this exhibition consisted of fragmented video images, scattered over the wall in a non-linear way. To get an impression of the complete image, the visitor could log onto a web page of a local server, which showed the complete image. Pushing the knob on the box retrieved a video with sound, which could be listened and looked at. The more people were logging in, the more a 'cloud' of sound came into existence, produced by real sound sources, and dispersed over time.

Our contribution to the group exhibition at the Helmhaus in Zurich, Switzerland. The exhibition was opened from February 15th until April 7th 2019.

These are some images of the three stage performances Melaku and Jeroen have been working upon until Summer 2018. They include Meeting (2013), Fano (2014), and CLASHES&CROSSFADES - metropolic moments (2017/2018). The last performance will be available until Fall 2020. 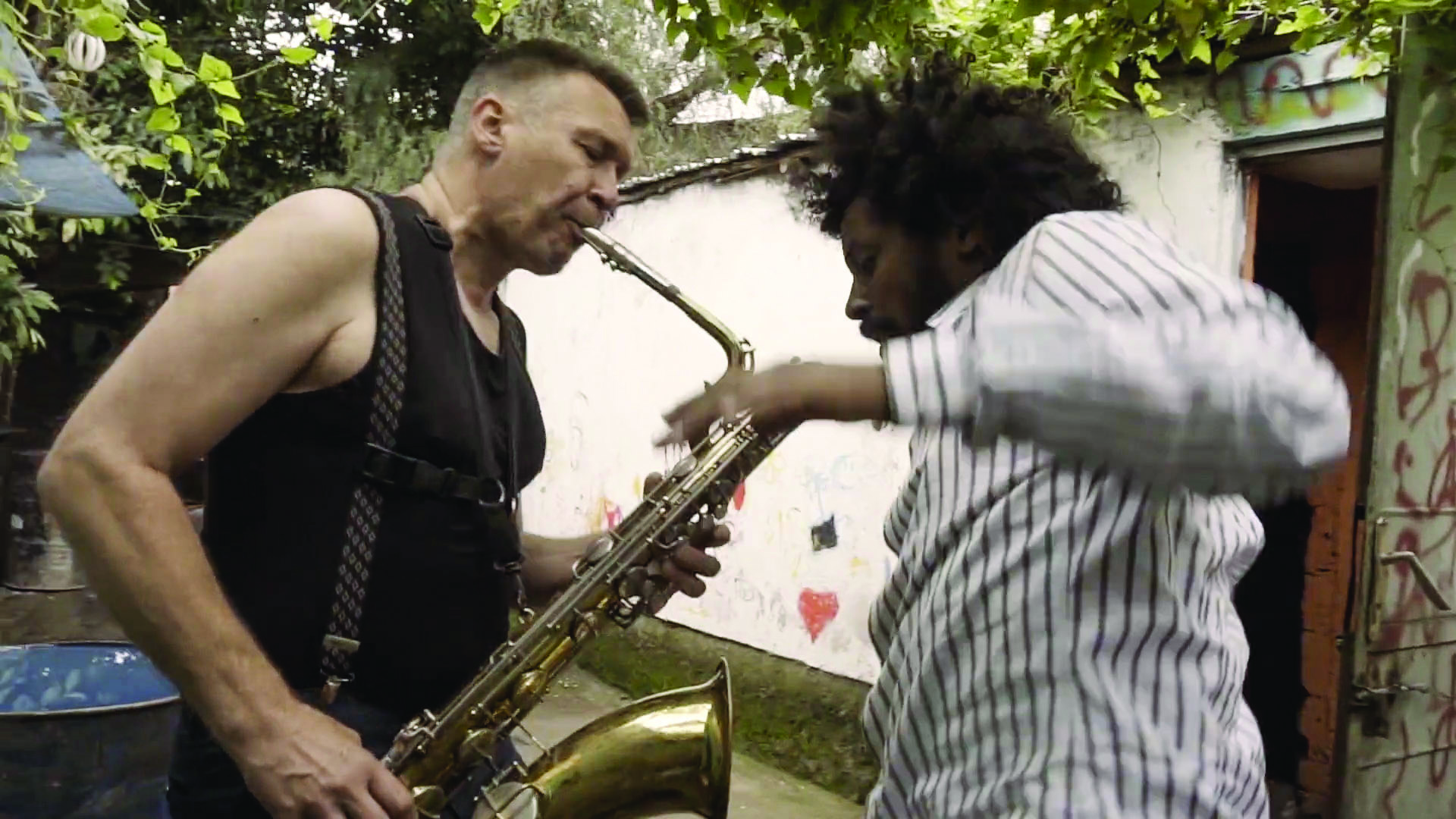